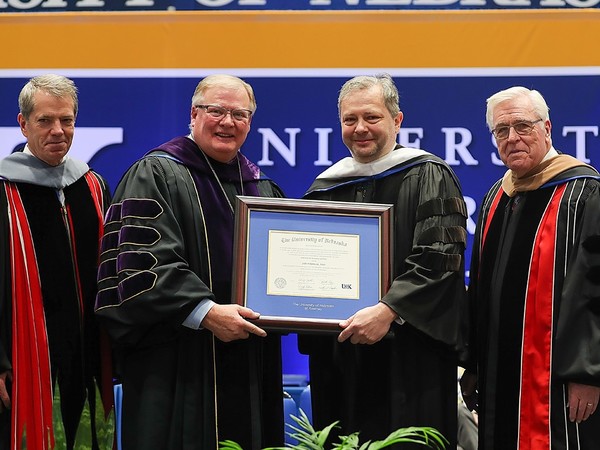 Honorary doctorates were awarded to Associate Professors Jan Stejskal and Martin Elbel from the UP Faculty of Arts. Pictured are Doug Kristensen, Rector of the University of Nebraska (on the left), and Jan Stejskal, Dean of the Faculty of Arts (on the right).
Photo gallery: UNK and J. Stejskal and J. Stavovčík archives
Sunday 18 December 2022, 11:00 – Text: Milada Křížková Hronová

The University of Nebraska at Kearney (UNK) awarded honorary doctorates to academics from the Palacký University Faculty of Arts. Two colleagues from the Department of History, Associate Professors Jan Stejskal (Dean of the Faculty of Arts) and Martin Elbel personally received the degree in honour of their twenty-five years of cooperation with the U.S. university.

The two received the honorary degree at a ceremony at UNK, attended by the newly elected Nebraska Governor, representatives of the University of Nebraska including its alumni, and UP Vice-Rector Jiří Stavovčík.

“An honorary doctorate is the highest honour any academic can receive from their colleagues. There is nothing greater in academia. My colleague Martin Elbel and I both accept it with enormous respect. The University of Nebraska has awarded honorary doctorates to Presidents Roosevelt, Clinton, and Gorbachev. I therefore delivered the ceremonial speech with great esteem and gratitude,” said Stejskal.

The two received the award primarily for the Nebraska Semester Abroad programme, which they have been running for twenty-five years and thanks to which Nebraska students can study at the UP Faculty of Arts Department of History. The programme has now more than seven hundred graduates and has gradually become the basis for further cooperation; both honoured academics also lecture in the programme.

“Our programme is the oldest existing international study programme at Palacký University. I am very glad that it continues to thrive and that UP Rector Martin Procházka promotes its development. Thanks to this, students from UNK will be able to study at our Faculty of Health Sciences, too, in January, while in March they will arrive at the Faculty of Arts,” said Stejskal.

Doctor honoris causa is an honorary academic title awarded to individuals who have made a significant international contribution to the development of science and culture or the benefit of humanity.

“For me as well as for Associate Professor Elbel, I believe, this honour from the University of Nebraska means a great deal. I think it is also an acknowledgement of all those who have been involved in the programme. At this point, I must also pay tribute to Rector Emeritus Josef Jařab, who opened the path for this collaboration twenty-five years ago. It appears his faith was not misplaced,” added the dean. 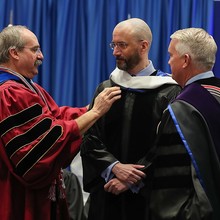 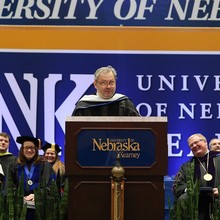 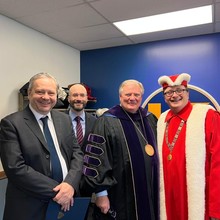 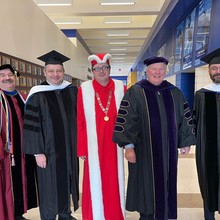 We use cookies and any other network identifiers on our website that may contain personal data (e.g. about how you browse our website). We and some of the service providers we use have access to or store this data on your device. This data helps us to operate and improve our services. For some purposes, your consent is required to process data collected in this way. You can change or revoke your consent at any time (see the link at the bottom the page).