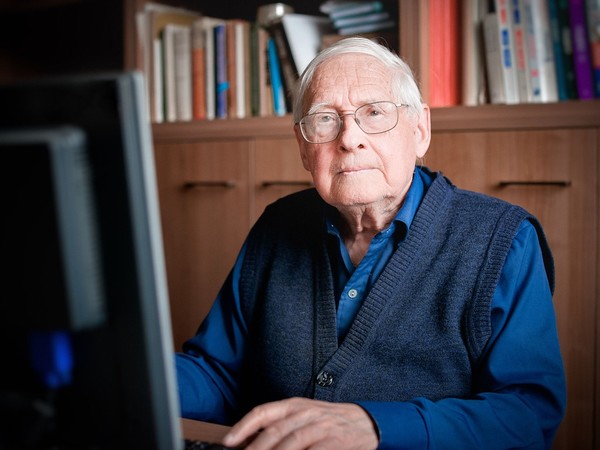 Four yours ago, the UP Archives approached Professor Emeritus Jaroslav Peprník with a request to enrich the living memory of Palacký University by adding his own recollections. After more than six months of work, Vzpomínky anglisty [Memoirs of an English Studies Scholar] has now been published by UP Press, making it the ninth volume of the Palacký University Memory series.

Jaroslav Peprník, Czech philologist and linguist, is one of the founders of English Studies in Olomouc. One of the striking aspects of his professional activity is his extensive, far-ranging knowledge of the literatures and cultures of English-speaking countries. For a long time, English classes at Czech universities and secondary schools could not do without his textbooks. And due to his work in the field of lexicology, Prof Peprník is one of the leading Czech experts in this linguistic discipline.

Considering the date when Memoirs of an English studies scholar was published, it could be said that the book was a birthday present of the author to the academic community. Unfortunately, a proper book launch of this fascinating work is not possible, due to the epidemic situation. However, anyone who is familiar with Prof Peprník knows that he would appreciate it if, when reading his memoirs, they join him with a toast of absinthe, which Oscar Wilde favoured.

The reader learns in the book that the author had two motives to write his memoirs. The first was based on his belief that two thirds of his life were more dramatic than the lives of the acclaimed English studies scholars Mathesius, Trnka, Vachek, and Poldauf. In addition, his aim is to entertain his readers, rather than educate them in the fields of lexicology, lexicography, English teaching methodology, and the history of contacts with the English-speaking world. He visited Britain seventy years ago and the United States fifty years ago, so readers can compare his experiences with their own, made in happier times. The second motive, according to Prof Peprník, is that he plans to read the memoirs when his memory ceases to be reliable. Moreover, he secretly hopes that his grandchildren will read it when they’re old. He believes that oral histories rarely survive three generations.

According to Aleš Prstek, director of UP Press, the book is being published now for yet another reason. “The publication was made possible thanks to the personal efforts of Prof Lubomír Machala, who negotiated financial support not only with UP Rector, as is customary in this series, but also with the UP Faculty of Arts Dean,” explains Prstek, adding that the publication was prioritised thanks to this support.

The memoirs of Jaroslav Peprník were published nearly without any photographs, at his firm request. “Apart from the introductory photo, the reader will not find another before the very end of the book. It perfectly illustrates the author’s dry - and sometimes even black – humour, for which he is well-known among his colleagues and students,” explains Háta Kreisinger Komňacká from UP Press, where they have been working on the memoirs since autumn 2020.

As she recalls, during the preparations of Memoirs of an English Studies Scholar, Prof Peprník only paid a few brief visits to the university publishing house, however, his presence at the Department of English and American Studies has been always steady. This is confirmed by the author in the book: “My classmates, now retired for thirty years, never understand that some people want to go to work even if they don’t have to. I keep telling them: ‘You can hardly look forward to having a free weekend because you’re on a permanent weekend. (…) And so after a sound night’s sleep, I walk to our beautifully renovated faculty, where there is a garden now instead of the previous asphalt yard, I ignore the elevator and climb two flights up to my office, chosen by the head of our department, Assoc Prof Lída Veselovská, and I take delight in the view from my window, overlooking the park under the city rampart walls, and then I turn on the computer.”

With the UP Memory series, Palacký University expands knowledge of its own history with the memories of its teachers and researchers. This more than 150-page work by Prof Peprník has become another colourful piece in this important mosaic.

“Readers of my Memoirs of an English Studies Scholar, as I hesitantly called my manuscript as a tribute to the work of my teacher and benefactor Prof Vachek, are hereby warned: they will not find encounters with prominent linguists, let alone public celebrities, or descriptions of visits to numerous universities and appearances at notable conferences. They will have to settle for my stories about what I had experienced before I became an expert in English Studies, and what happened later in my life. A more accurate title of this manuscript would be The Adventures of a Moravian English Studies Scholar on Two Continents in Two Centuries,” writes Jaroslav Peprník in the foreword.

The impulse to launch the UP Memory series came from the director of the university archives, Pavel Urbášek. Since then, UP Archives have been proposing a new author every year. The first title in the series was an annotated book of memoirs by classical philologist Julie Nováková, followed by the memoirs of physicist Jan Peřina, Russian literature scholar Miroslav Zahrádka, historian and former Faculty of Arts dean Josef Bieberle, and Prof Emeritus Miloš Trapl. Other additions were the memoirs of sculptor Bohumil Teplý, and linguist and scholar in Hispanic and Portuguese studies Jiří Černý, and last but not least, the memoirs of Josef Jařab, former UP rector and one of the key figures of the 1989 Velvet Revolution in Olomouc, which were also published as an audiobook, recorded by the author himself. The memoirs of English studies scholar Peprník are volume number nine. Next in line should be the memoirs of Prof Miloslav Duda of the Faculty of Medicine and Dentistry, and Prof Zdeněk Kučera, former head of the Department of Art Education. UP Press is trying to give the unique edition a proper look. “The autobiographies of important personalities from our university deserve to look impressive. I believe that Memoirs of an English Studies Scholar will find its readers immediately,” adds Kreisinger Komňacká.

Jaroslav Peprník (b. 1927)
He graduated in English and History at the Philosophical Faculty, Masaryk University in Brno. His dissertation (1950) was entitled “Nominal Tendencies in Modern English Prose”. Since 1954 he has been working at the UP Faculty of Arts in Olomouc. At the Department of English and American Studies, he specialises in contemporary English, particularly lexicology. Peprník’s first university textbook Angličtina pro lékaře [English for Physicians], reviewed by Prof Pavel Lukl and published in 1966, was republished several times and used also at the Faculty of Medicine, Charles University in Prague. This was followed by the textbook Angličtina pro filology I–II [English for Philologists I–II] (1984, 1987). Thanks to his work on the Slovník amerikanismů [Dictionary of Americanisms], he was the only Czech professor to receive a Fulbright scholarship in 1969, with a six-month stay in the USA. Another successful textbook was Angličtina pro jazykové školy [English for Language Schools]. He was allowed to obtain the academic degree of “candidate of philological sciences” only in 1986, on the basis of his candidate dissertation Sémantika pojmenování barev v angličtině a češtině [The Semantics of Naming Colours in English and Czech]. He only could become an associate professor after the fall of the communist regime in 1989. His professional work has focussed on research of the contacts between the Czech lands and the English-speaking world, culminating in the publications Anglie očima české literatury [England through the Eyes of Czech Literature] (2001), Amerika očima české literatury [America through the Eyes of Czech Literature] (2002), Češi a anglofonní svět: kontakty a percepce [The Czechs and the English-speaking World: Contacts and Perception] (2012), and Anglofonní svět a Češi [The English-speaking World and the Czechs] (2016). His works for the general public include the history book Británie a USA: Ilustrované reálie [Great Britain and the United States: Illustrated Facts] (2004) and an anthology of short texts from The Times, called Journalistic English (2005). After 1990, he devoted great efforts to the revision of English passages in Oldřich Švarný’s textbook Hovorová čínština v příkladech [Conversational Chinese via Examples] and a revision of Velký česko-anglický slovník [Great Czech-English Dictionary] by Josef Fronek.